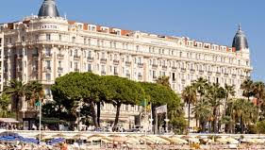 “Hawdon fools the audience with an array of assumptions and his permutation games reach dazzlingly absurd heights.” – General Anzeiger Bonn.

“A show the whole family can enjoy” – Stella Samaras, Sydney. Also known as ‘Coup de Grace‘, and in the USA as ‘Diamonds and Divas’

The Cannes Film Festival!  Most glamorous of all cinema occasions.  In a luxury Riviera hotel the body of a beautiful film star lies prostrate. A hooded jewel thief breaks in and discovers her.  A man bursts in and assumes the thief is the murderer.  Another man enters and assumes another story.  The film star wakes from her blackout and assumes a third story.  The hotel manager arrives and attempts to make sense of all the stories.

A huge film premiere is looming, a diamond necklace has gone missing, scandalous affairs are about to hit the headlines, everyone appears to be trying to murder someone whilst blaming everyone else.   Never has the Riviera seen such a dastardly sequence of events.  Never has Hollywood created such a catalogue of criminal conspiracies.  Could real life ever be like this, or are show-biz temperaments simply running out of control?  Bring down the curtain!

ARCH UPSTAGE to vestibule and entrance door. French windows to balcony overlooking the sea. Door off to the BEDROOM.

Louis XIV furniture. Wide sofa facing downstage. Side table beside the sofa. Large desk to one side with drawers. Table with glasses, champagne flutes, etc.

Circa 21 Dinner Theatre, Rock Island, Illinois – Feb 2019 Just when you begin to think you know where this production is going, something new and outrageous happens, elevating the story to a new, impossible height chock-full of humor. This is a show that doesn’t take itself seriously at all, which allows the audience to just let go, suspend reality, and have a good time. – USA River Cities review

Kontra Kreis Theatre, Bonn  “Ever since Alfred Hitchcock had beautiful Grace Kelly and suave Cary Grant ‘Catch A Thief’ in Nice, we have known that the French Riviera is an excellent place for a jewel robbery.  Its wicked reputation was renewed only a few years ago when very posh rocks worth more than 100 million Euro changed hands unlawfully at the Carlton Hotel in Cannes. Robin Hawdon’s comedy deals with a sizeable diamond necklace which belongs to film actress Grace Gervaise, and this priceless piece has vanished.  Furthermore Grace is discovered lying on a sofa, beautiful but lifeless. This story about glamour and dirty deeds during the Cannes Film Festival was enthusiastically applauded by the audience. The superficial tale of a complex criminal case involving missing diamonds and apparent attempted murder, which Hawdon weaves into his delightfully old-fashioned ‘murderous comedy’, is actually only a marginally important aspect. The author is more concerned with something more important: the enigma of reality versus outward appearance, of truth versus fiction. With Hawdon, doubt is everywhere. Everyone suspects everyone else, no-one is quite who they seem to be, even the much in evidence sexuality is often a subterfuge, and the apparent dead bodies, which turn up in considerable numbers, resemble Lazarus in that they tend to join quite soon again with all the others on stage. Hawdon fools the audience with an array of assumptions, and his permutation games reach dazzlingly absurd heights. During the course of the play we learn that actress Grace owes her popularity mostly to second rate B-movies. Hawdon’s play, however, can be classified as a genuine A.” – General Anzeiger – Bonn (translated from the German)

Lighthouse Festival Theatre, Ontario, Canada – 2018 AUDIENCE RESPONSES — Kyla Driedger: ‘Saw this on Thursday and LOVED it. I haven’t laughed out like that in a very long time. And the plot twists were fantastic.’ -Moore White: ‘Do not miss it. Great fun and marvellous actors. ‘ – Ann McKenna Shaw : ‘Loved it! Great production….so many twists n turns….extremely entertaining….’ – Karen Belinda Lucas: ‘Loved it!! Really funny and clever! Awesome acting!!’ – Susan Stahl: ‘Great show! Laughed and smiled through the whole production.’ – Diana MacKenzie: ‘Loved the show’ – Helen Mary Hubert: ‘I saw this last night.   Great comedy.’ – Glenys Baker: ‘Saw this production, what a fabulous show and lots of laughs.’

“Hawdon’s latest play is sure to be another winner. His cleverly constructed plot weaves its magic without resort to crude language nor lewd staging. The only ones that can see the truth are the audience and we laugh at the lot of them. It’s a show that the whole family will enjoy. ” – Stella Samaras