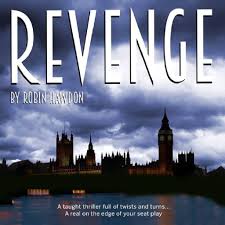 Revenge is Robin Hawdon’s only thriller. A two-handed mystery concerning an ambitious MP and business tycoon, visited in his luxury Mayfair apartment by an unknown woman who turns out to know a great deal more about his activities than she should do.

Bill Crayshaw M.P. is a man with huge wealth and influence.  When an attractive woman arrives at his door with some awkward questions as to how he acquired such assets, he almost relishes the confrontation of the sexes.  But he can hardly guess to what extraordinary lengths that confrontation will go.

Is her motive investigation, seduction, blackmail, revenge, or something else altogether? She turns out to know a great deal more about him than he finds comfortable, and her true identity is concealed behind so many onion skins of mystery that one can never be certain of it, or of his own integrity, until the final curtain.

First produced on tour of the UK starring Fiona Fullerton and Patrick Mower. Followed by various tours and productions around Europe.  Touring the UK in 2020.

“A taught thriller full of twists and turns” – The Stage