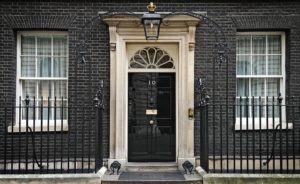 The famous address of the title, Number Ten Downing Street,  has a new dynamic incumbent, James Torrence – elected on his promise to get to radical grips with terrorism and big-time crime. He is sincere and determined, as are most fledgling Prime Ministers until exhaustion and cynicism set in.  Consequently he has serious opponents.

Terrorist bombs have wrecked a commuter train, and the P.M. himself is almost killed by a suicide bomber in St James’s Park. There appears to be a mole within Number Ten, providing inside information on his movements.

A  junior member of his staff, Paul Gunter, suddenly finds himself compromised and  implicated as the main insider suspect.

He is apprehended and interrogated by MI5 in the middle of the night, and then sent to Scotland Yard for further questioning. On the way however his car is held up in a deserted side street, and rammed by a truck in an attempt to eliminate him before he can implicate the real traitor. His escorts are rendered unconscious, but he himself is dragged from the wreckage and forced to escape before the police recapture him.

He is now plunged into a desperate flight from MI5, the police, and the Russian mafia leaders who have exploited the terrorist situation in an attempt to get rid of the Prime Minister, himself now politically besieged over the radical measures he is proposing.

Paul can only prove his innocence, and expose the true culprit within Number Ten, with the help of Andrea Holt, a senior staff member there. This adds to his problems as a) he is in love with her, and b) she is herself sceptical of his reliability.

However despite these hindrances she finds herself drawn into his predicament, and under equal threat, having to flee with him from the law and from his pursuers.

Love, justice and political integrity triumph – but only just.