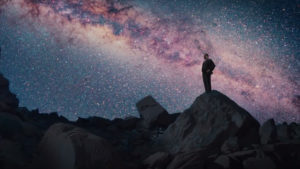 ‘God and Stephen Hawking’ is the most original and challenging of all Hawdon’s plays. It caused a minor media-storm on its pre-London tour in 2000, starring Robert Hardy and Stephen Boxer – when Stephen Hawking, having first given it his endorsement, than denounced it as an intrusion on his private life, despite the fact that it is generally recognised as a tribute to him.  The critics took dramatically opposing sides, and in the controversy the play never made it to London, despite a generally enthusiastic reception from the early audiences and commentators.

The play uses Hawking’s extraordinary life and career as a vehicle around which to explain in theatrical terms the scientific themes explored in his own best selling book “A Brief History Of Time”. In a hugely demanding central role (played in that production by Robert Hardy) God appears as himself, and in various guises as Isaac Newton, Albert Einstein, professors, mathematicians, the Pope, and even the Queen!

The play is still highly relevant, since ‘The Theory Of Everything’ which Hawking famously conjectured as one great Eureka moment which would bring all competing theories together, has yet to be discovered.

Audiences emerge, not only having had a hopefully entertaining evening, but also with an  increased understanding of modern scientific enquiry into the complex mysteries of the universe, and its impact on traditional religious attitudes.

A bare stage backed by as large a projection cyclorama as is feasible.